The National Shoreline (NSL) is an umbrella term for all object classes related to the shoreline (shoreline, over water rock, rock awash, quay, pier, fender, pile fendering, breakwater, dolphin and boom). Lantmäteriet (the national land survey agency) and the Swedish Maritime Administration (SMA) have a joint responsibility to map, update and manage NSL at a scale of 1: 10 000.

From 2005-2019, the two government agencies worked together to map the shoreline in all areas with commercial shipping. This included Sweden’s coastline, largest lakes and canals. Initial mapping as well as updates to the NSL principally use stereo cartography.

Lantmäteriet and SMA use the same data specification, methods and routines for storing and updating NSL. The original NSL database is housed by Lantmäteriet. Both agencies carry out smaller updates to keep NSL up-to-date, while major work, such as yearly overhauls of NSL and carrying out re-mapping projects, is done mainly by Lantmäteriet. Lantmäteriet has a plan in place to inspect and update all areas of the shoreline at least once every three years. The responsibility for assessing if an area must be re-mapped in its entirety lies with SMA.

NSL is used in products developed by both Lantmäteriet and SMA. It is published in Lantmäteriet’s printed property maps and in their topographic web map service. SMA uses NSL in their nautical charts and other specialized products.

A clearly distinguishable boundary between water and land. 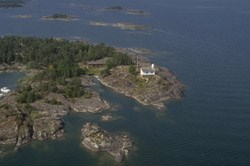 A boundary between water and land that varies or is not clearly distinguishable. Ex. Sandbars, reeded areas. 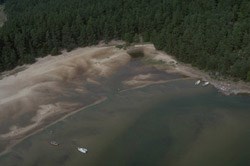 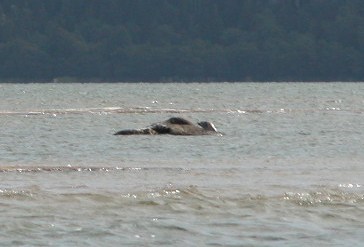 A fixed landmass that is between 2 dm above and 5 dm below the mean sea level. 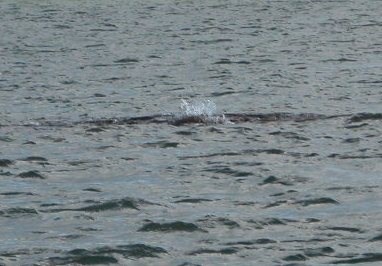 A construction connected to the coastline that is used for mooring vessels. The construction has one or more vertical sides facing deep water and a flat top surface to handle goods. 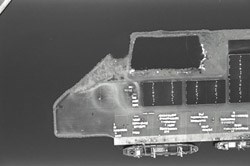 A construction that reaches out into the water for the purpose of mooring smaller vessels. Can also be used for swimming, etc. 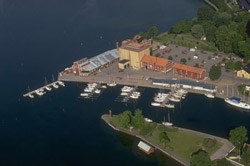 A construction built along wharves to protect and cushion vessels. 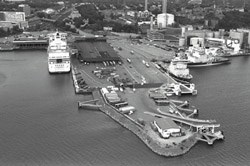 A construction built along bridge pilings to protect and cushion against passing vessels. 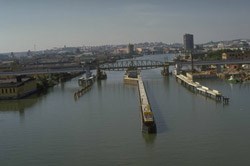 A construction to protect harbours and anchoring areas from waves.

A mooring construction fixed to the bottom and made up of grouped pilings or concrete. A construction that reaches over the water and holds lights, illuminated signs, pipes or cables.