The traditional way of referring depth information in Swedish charts is by specifying a mean sea level for a given year (typically the chart production year).

The traditional way of referring depth information in Swedish charts is by specifying a mean sea level for a given year (typically the chart production year). However, since the majority of the Swedish coast has a continuous land uplift, depth information in these areas gradually becomes obsolete. Uplift entails that both land and the seabed rises relative to the ocean surface as a result of having been depressed by the weight of the ice sheet during the last ice age. The uplift is greatest in northern Sweden, where it is about 1 cm/year. 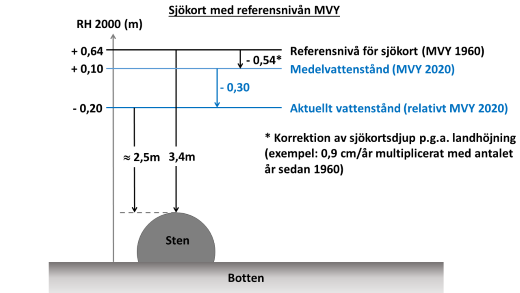 NOTE! The example is designed to demonstrate an extreme case in the Gulf of Bothnia, where the land uplift is greatest, but since the Swedish Maritime Administration is working to introduce a new reference level in Swedish charts and started this work where the consequences are greatest, the current  edition of chart 4151 is related to the new the reference level, the Baltic Sea Chart Datum 2000. See also the attached links on Reference Levels.

See adjacent links for information and data about the current sea level and the current year's mean sea level.